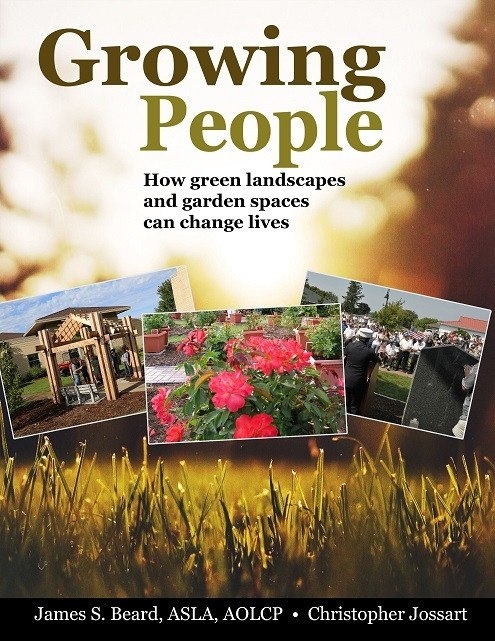 About the Book and Authors:
Instructors in both secondary education and higher education now have a supplemental blueprint for soft skill immersion and technical know-how in the world of green. Whether it’s agriculture or horticulture, Growing People: How green landscapes and garden spaces can change lives, infuses success in those who play in the soil.

A renowned land care expert of 40 years teamed up with an award-winning writer to bring you a blend of story-telling landscape architectures and simple steps to making your own Beds, Bales, Buckets, & Brews system for growing organic vegetables. Growing People is two books in one with stories of life-changing green immersions and a revolutionary organic growing system that runs itself on one solar panel. The Beds, Bales, Buckets, and Brews system was piloted at a major health care system in 2015, and its harvest received "best-tasting" results from an executive chef. The system is now making its way into more hospitals, schools, and backyards of everyday gardeners like you and me. Beard and Jossart have earned both international and national media coverage for their work spanning more than 60 years between the two of them, and Growing People has already landed in several retail establishments since its release just six months ago. Now the book is enjoying its first spring and first run as an eBook with Sentia Publishing. There is nothing on the shelves like this read when it comes to innovation, simplicity, and preserving our hips, knees, and back when gardening! Have fun growing organic vegetables in any space with very little time!