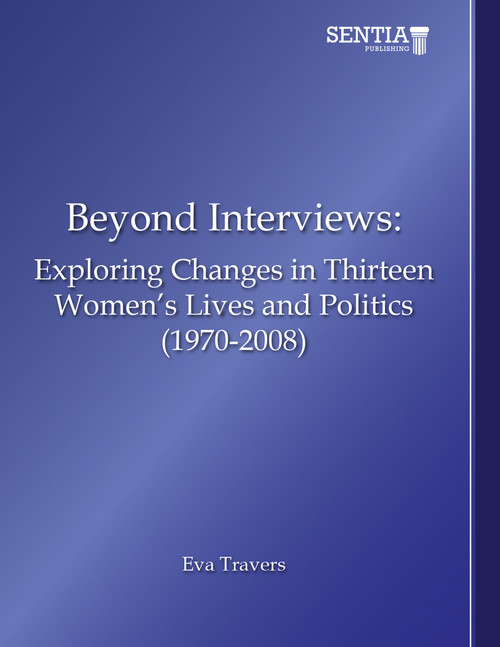 This book, Beyond Interviews: Exploring Changes in Women’s Lives and Politics  (1970-2008), examines the life trajectories and social and political views and behaviors of a diverse group of thirteen women I  interviewed four times--from their junior year in high school in 1970 through their mid-fifties in 2008. As a group, they were part of a distinctive generational cohort. However, as juniors, the young women’s educational and political views and participation in protest activity varied significantly. In 1970 the women attended an academically prestigious high school that stressed critical thinking and inquiry oriented learning. During the 1969-70 school year the high school was unusually politicized. Anti war activities and protests culminated in a week long strike in May. On the basis of their participation in anti war activities, in this book I originally divided the young women into four groups--ranging from radical activists to nonparticipants.

Key questions I explore in this book include:

How did coming of age in this academically progressive and highly politicized high school affect the political and social beliefs and behaviors of theseyoung women in 1970?  How did they subsequently respondto and analyze key current events, and social and political issues?

What were the women’s reactions to the goals and issues raised by the Women’s Movement, which was in its infancy when they attended high school and paralleled their lives through adulthood? How did they evaluate the objectives of the movement and the questions it raised? How did the movement affect personal choices and decisions as the women responded to increasing opportunities and ongoing challenges.

Between 1970 and 2008, the focus and methodology of this book changed in some important respects, as I increasingly incorporated feminist approaches to qualitative research.  In 1970, the interview included questions about education and equality of educational opportunity and political views and behavior. The interview process was formal, and I viewed the women as subjects. In 1979, the interview focused minimally on educational issues, but I continued to ask questions regarding political stances and added questions about current events and social issues. In this round of interviews, I also added a life history section.. The women were especially engaged as they spoke about changes and key experiences in their lives. For the most part, in the life history section of the interview the women guided the interview process, and the relationship between the women and me became less formal than in 1970. In 1987, I continued to ask questions about social and political stances and reactions to contemporary events as well as included a life history section. In the life history portion of the third interview, the women basically directed the interview, and relationships between the women and myself were even less formal. I viewed the women as contributors.  In 2008, after a gap of twenty years, I first had individual conversations with the thirteen women to establish rapport, and we talked about changes in our lives. I later informally interviewed the women, and frequently interjected my own views and experiences. In this round of interviews, the women and I interacted naturally, and the women essentially became collaborators in the research.