The Long Struggle for Justice: The Legacy of Racism (Mario Salas) - Online Textbook 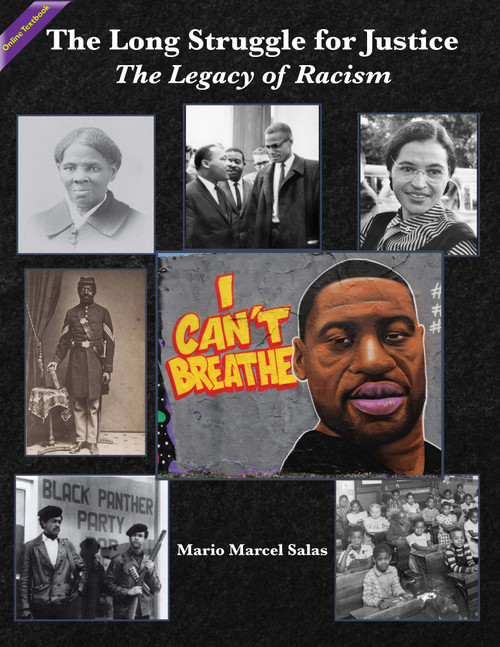 The Long Struggle for Justice: The Legacy of Racism (Mario Salas) - Online Textbook

Professor Mario Marcel Salas is a retired Assistant Professor of Political Science, having taught Texas Politics, Federal Politics, Political History, the Politics of Mexico, African American Studies, Civil Rights, and International Conflicts. He has served as a City Councilman for the City of San Antonio, and was very active in the Civil Rights Movement in SNCC for many years. He is also a life time member of the San Antonio NAACP. He has authored several editorials, op-eds, and writings.

Professor Salas helped to develop the first economic relationship with an African country for the City of San Antonio with Mafeking, South Africa. He championed the establishment of a Dr. Martin Luther King Jr. Texas state holiday and served as Vice-President for the Judson Independent School Board of Trustees. He is the President of San Antonio Community Radio (KROV) and is active in San Antonio Politics. He served as a 300-Year Tricentennial Commissioner for the City of San Antonio and is a member of the Bexar County Historical Commission and is considered an expert in African American History.

Professor Salas also helped to co-author the Amicus Brief that went before the U. S. Supreme Court in the case of Grutter vs. Bollinger as a veteran of the Civil Rights Movement. He has done extensive research on African Americans in San Antonio, Texas, Afro-Mexicans, and the Black Seminoles. Mr. Salas has archived material maintained by the Special Collections Department of the University of Texas. He helped to develop and present the essential elements for African American Studies courses for high school students across Texas which was passed by the State Board of Education. He has received many awards including the San Antonio Peace Laureate Award and an Honorary Doctorate of Humanity from the Baptist Association-Guadalupe College. He is married to Edwina Lacy Salas and has two children, Angela and Elena and 4 grandchildren.

Historical Archives: Texas Portal to History, University of North Texas at https://texashistory.unt.edu/explore/partners/PMMS/ and UTSA at: https://legacy.lib.utexas.edu/taro/utsa/00096/utsa-00096.html