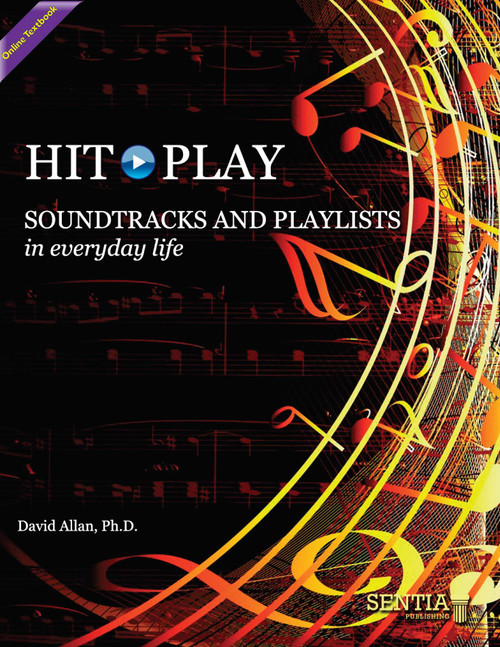 Dick Clark is famous for saying that “music is the soundtrack to our lives” because everything that happens to us has been “scored” either by ourselves or someone else. It’s true. Music plays as time passes. It is clearly the soundtrack of our lives. The soundtrack of yesterday has become a playlist today, and playlists certainly are proliferating. This book looks at the progression from soundtracks to playlists. It looks at music in our daily lives most of which we now “score” ourselves.  Our music libraries include songs from before we are born (Mozart effect) to after we are dead (Amazing Grace), with special occasions like birthdays, graduations, weddings, and anniversaries in between. This also gives voice to the role of music in sports, politics, religion, advertising, and the media (television and movies). It provides a little history, theory, and prospective to our soundtracks. Finally, true to its name, each chapter ends with a suggested playlist. Something to listen to while you read or to remember what you read after you’re done. So put on your headphones and hit play today!

David Allan, Ph.D. is a Professor of Marketing at the HAUB School of Business at Saint Joseph’s University in Philadelphia, Pennsylvania where he teaches Music Marketing, Marketing Communications, and facilitates seminars on Business Communications for corporations such as SEI Investments and Irwin & Leighton. Dr. Allan has a BA from The American University, an MBA in Marketing from Saint Joseph's University, and a Ph.D. in Mass Media & Communication from Temple University. Dr. Allan has published extensively in academic journals such as the Journal of Advertising Research, Journal of Business Research, Journal of Consumer Research, and International Journal of Advertising, etc. Dr. Allan has also been featured on NBC, and in the Philadelphia Inquirer, Washington Post, Chicago Tribune, Atlanta Constitution, Billboard Magazine, Radio and Records, and other prestigious publications. Allan is also one of the founders of go3media (www.go3media.com), a branded digital content innovations company that creates internet music channels. He is also President of Dave Allan Media and Marketing (www.drdavidallan.com) - a full service programming and marketing consulting firm with clients like Inner City Broadcasting, Greater Media Philadelphia, and Viacom. Dr. Allan brings to his work the resources that are earned from an extraordinary career of over 20 years in radio broadcasting which began as a Disc Jockey and ended as General Manager for many media companies including Clear Channel Communications, AMFM, Chancellor Media, and Evergreen Media. Dr. Allan is an active member of several prominent academic and industry organizations including American Marketing Association (AMA), American Academy of Advertising (AAA), Association for Education in Journalism & Mass Communication (AEJMC), Broadcast Education Association (BEA), International Association for the Study of Popular Music (IASPM), International Communication Association (ICA), National Communication Association (NCA), Popular Culture Association (PCA), Society for Consumer Psychology (SCP), and Theta Chi Fraternity.